ZE ZANO was created by Russian designer Youlea Zilkowsky. She gave leather a new meaning with her original and unique new style that is immortal. ZE ZANO designs are not only exquisite, they radiate glamour and sensuality.

Made with premium leather, every piece is skillfully hand crafted and created with a perfect balance between chaos and serenity… "a golden middle".

Her high end leather wear encompasses designs that are alluring and comfortable as well as contradicting and controversial. They are made to compliment and accentuate a woman's body and has a feel and touch of exotic nature. 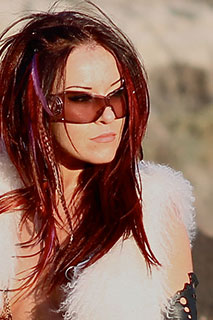 YouleaYoulea Zilkowsky was born in Moscow, Russia on June 19th 1976. She began designing in her early teens simply has a hobby until she emigrated to Canada at the age of 21. Just a few years later, Youlea was notorious for shocking people with her extravagant and eccentric style.

During her teens Madonna was the first to inspire Youlea with her strong individuality and sense of style. Youlea quickly discovered a thirst for pushing limits. She would soon design and create head turning clothing and accessories for herself. As she continued to expand and develop her skills and designs, she found a passion for leather with exotic nature being her ultimate inspiration.